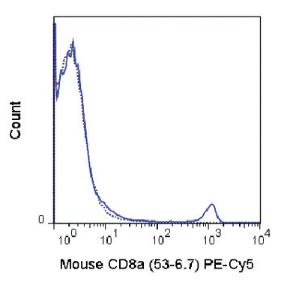 55-0081-U025EA 41.8 EUR
55-0081-U025 55-0081-U100
Anti-CD8A Rat Monoclonal Antibody (PE (Phycoerythrin)/Cy5®) [clone: 53-6.7]
Antibodies
The 53-6.7 antibody reacts with the 32-34 kDa alpha subunit of mouse CD8, known as CD8a or CD8 alpha. CD8a can form a homodimer (CD8 alpha-alpha), but is more commonly expressed as a heterodimer with a second chain known as CD8b or CD8 beta. CD8 acts as a co-receptor in antigen recognition and subsequent T cell activation that is initiated upon binding of the T cell receptor (TCR) to antigen-bearing MHC Class I molecules. The cytoplasmic domains of CD8 provide binding sites for the tyrosine kinase lck, facilitating intracellular signaling events that lead to T cell activation, development, and cytotoxic effector functions. CD8+ cytotoxic T cells (CTLs) play an important role in inducing cell death of tumor cells, as well as cells infected by virus, bacteria or parasites.

The 53-6.7 antibody is widely used as a phenotypic marker for mouse CD8a expression on cytotoxic T cells, thymocytes, as well as on certain cell types that do not also express the TCR, including some NK cells and lymphoid dendritic cells.